Peter Schmiedchen (Piet van Sation) is the founder and managing owner of VANSATION and its first-ever Chaufführer.

He was born in the year dot and raised in pretty darn, pretty good social housings under the beatlemanian protection of Churchill’s post follow-runners as a proletarian 60s-desaster-child in the so called down-home, the former Kingdom of Westphalia, within Germany, a creation of Emperor Napoléon Bonaparte.

In his mid-twenties, at the end of his first working life, he settled first to the Francophile and then to the American sector of Berlin. Here he took the electric master craftman’s diploma (‘bachelor professional’). Instead of exploring this down-home profession, he took the decision to work as a teacher in the adult education.

In 2010 – after suffering during 10 post iron-curtain-years offside in the heart of the total unfamiliar former Soviet sector’s metropolis East Berlin – he was celebrating rather isolated his 30 years of operating experience in the hospitality industry. He started this desired touristic career as a pedagogical advisor in a summer holiday camp nearby London: One is that British summers used to be longer and sunnier, (…)

After several unthankful un-freelancer jobs as a long distance coach driver of overland tourist buses as well as a chauffeur of limousines and nightliner double-deckers for stars and VIP, he splitted to Barcelona and established there his 1st Vantastic Sightseeing Travel Agency KONTRAVENT – Viatges Vantàstics.

Now he is an apprenticed hotel meister, due to that on 1 November ’89 he began as a master builder and owner of the small Boardinghouse EUROVENT in Berlin’s most bohemian borough, Kreuzberg. He has worked almost always – offside of rat races – for his own independent and self-determined enterprises.

Moreover he is a well grounded professional of spa tourism and a trained expert of exhibition, congress and convention management, and – as a matter of course – actually he is a certified city and tour guide, in every sideway orientated at alternative methodes: In January of 1998 started out his adventure SIGHTJOGGING ∞ Connecting Pleasure! Of course, he finished overjoyed one marathon in 2001.

Mr. Schmiedchen neither holds a MBA of University of Wales in financial administration (there you’ll regard money of kinds of student with the addiction to bankster’s businesses) nor degrees of Free University Berlin (history (of economics))…, University of Technology Berlin (alternative educational therory and work sience) and Escola Superior d’Ensenyaments Universitaris de Gestió Hotelera, Sitges/ Barcelona (hotel management). Sightseeing as faculty wasn’t proffered in the tourist magnet Catalunya!

He had loved to major in entrepreneurship, and – as another matter of course – he would had finished it! Unluckily, this science doesn’t exist at that time, too. Nevertheless he stands in the forefront as a master of ideas and new concepts in his field of activity.

Back in the U.S. – closed to Checkpoint Charlie in Berlin-Kreuzberg – and back in his 3rd professional life, he’s composing himself: He backseat drives, guides and masters himself as well as his trendsetting company as its 1st vanguard Chaufführer. His primary focus has been always in the autodidactically plain-styling of Sightseeing Design, autogenetic to his automotive: “Never give in, never, never, never, never.”

Probably it would be an exaggeration to talk about another exsighting goal on Mr. Sightseeing’s path to Rome: Someday he wants to gonna be recognized of his own UNIVERSIGHTY for guests and guides and the I SEE ! ∞ Blind Persons Foundaction! as a PhD h.c. in 1001 Sightseeings.

And thereafter, maybe he’ll not going to let his students, guides and tour directors, join all the exsighting fun with ever-welcome guest-eyes from all over our earthy planets: Exsighteness will be in the eyes of world’s very 1st space vanguard, Mr. Schmiedchen: Guestomized cultouring and detouring exsighte your worldview.

His forefathers in Berlin already loved guests more than 100 years ago. 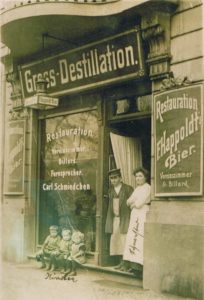 His customers come as visitors and some go as friends. It pulled some of them from Barcelona to Berlin; now they are neighbours and habitual guests.